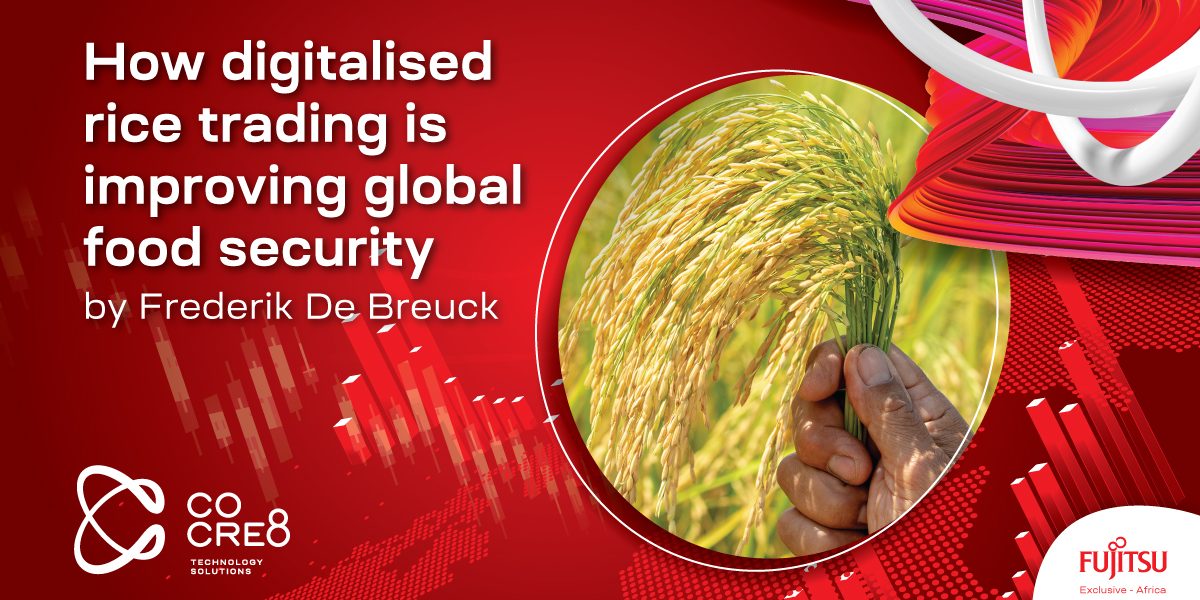 Food security is a huge issue for the world. So far, increased production has managed to keep pace with the extraordinary population growth over the last 50 years. But there are reasons to think we might have even more significant challenges ahead.

The UN predicts that the human population will peak at just under 11 billion in 2100, up from 7.8 billion today – that’s a rise of nearly 40% in just 80 years. At the same time, the amount of land available for food production is decreasing. According to the UN again, “two billion hectares of land on earth are degraded, affecting some 3.2 billion people, driving species to extinction and intensifying climate change.”

These twin, contradictory pressures require us to get everything right if we are going to avoid major disruption to food supplies. Fortunately, the digitalization of supply chains – including the use of new blockchain technologies – is progressing rapidly to help remove inefficiencies. I’m going to look at two specific improvements resulting from the recent digitalization of rice trading. The first is making global rice trading more straightforward, faster and more accessible to suppliers. The second is reducing the negative impact of rice agriculture on our planet, so we can be sure of continuing harvests into the future.

Making it easier to bring rice to the global marketplace
Despite the size and importance of global rice trading – it’s a $350 billion market annually – the traditional rice trading method is very inefficient. It’s paper-based, extremely slow – a single trade can take months to complete – and creates unnecessary costs. Paper-based trading is estimated to add 90% to a trade price – a cost paid ultimately by the consumer. It is also an opaque market, where face-to-face contact has been considered necessary to build trust – making trading during the pandemic difficult and even slower.

The new Rice Exchange (RiceX) platform, built by Fujitsu, brings new levels of efficiency and transparency to this market. It is the world’s first digital platform designed for buying and selling rice, and it’s now live and operational.

RiceX will transform access to this crucial food staple, which half the world’s population depends on as a primary source of calories. The platform digitalizes rice trading using a blockchain distributed ledger technology (DLT) platform. Through it, buyers, sellers and service

providers can easily find each other in a digital environment, efficiently conduct trades, and arrange insurance, shipping, inspection and settlement with the assurance of seamless integration and verifiable data. The transparency provided by the platform’s immutable blockchain audit log allows buyers and sellers to build relationships of trust.

The Rice Exchange platform simplifies documentation compliance, eliminating paperwork and expensive courier services, leading to lower transaction costs and more efficient back-end operations. By creating full transparency and trustworthy certifications, buyers no longer need to fly across the world to meet suppliers in person. RiceX and its partners in the shipping, insurance and inspection sectors have digitalized the end-to-end process and removed multiple sources of friction to streamline the entire supply chain.

The world’s biggest rice trades are now more accessible
RiceX also opens up the wider market to a broader range of suppliers and buyers. The largest trades tend to be in the form of tenders, which account for an estimated 20% of the 43 million metric tonnes of rice transacted every year. Agribusinesses, food retailers, state grain buyers and aid agencies rely on tenders to procure large volumes of rice, including when they need supplies to respond quickly to famine or natural disaster.

However, the tender process is cumbersome, document-heavy and costly. Notice of a tender is published in a trade gazette, and interested parties have to file the required documents and post a performance bond within a strict timetable. RiceX changes and simplifies this dynamic. The first tender is about to go live on Rice Exchange from a company that represents 70% of Costa Rica’s rice industry. This will allow the trade to be arranged quickly and attract a wide range of suppliers, with the added advantages of quality control, price discovery and an immutable audit trail. Tendering on RiceX is the beginning of a new era of accessibility to the global rice trade.

Ensuring the future of rice production
The second impact I will look at is perhaps even more important – certainly in the long term. It is addressing how to make rice production sustainable in the future.

Like all agricultural production, rice cultivation impacts the environment. It is the second-largest contributor of greenhouse gas emissions after cattle farming in the agricultural sector, with large quantities of methane – a particularly potent greenhouse gas – emitted from flooded rice fields as organic matter decays. Burning rice straw after the harvest also results in harmful emissions.

Buyers on the Rice Exchange platform can now connect with approved suppliers who conform with the Sustainable Rice Platform (SRP) Standard for Sustainable Rice Cultivation. This benchmark is aimed at rice smallholders and was developed by the UN Environment Program, the International Rice Research Institute and public and private sector partners.

After an onsite visit by an independent verification body, SRP suppliers receive a Verification Statement uploaded on the Rice Exchange platform. The buyer gets certainty that the rice is SRP-verified, and rice producers can charge a premium. Consumers are known to be willing to pay premiums between 9% and 33% for sustainably produced rice. With over one billion people economically dependent on rice farming, this has the potential to lift the incomes of many families.

The challenges of feeding the human population over the rest of the century are considerable. But the benefits of blockchain for greater efficiency and transparency are not restricted to rice, of course, and can be applied across any supply chain. With new technologies like blockchain, Fujitsu believes it is possible to create what we call “human-centric innovation” and ensure society rises to the future demands.

Frederik De Breuck is Head of Fujitsu’s Blockchain Innovation Center in Brussels and CDO/CTO for Fujitsu Belgium. He works with a team of Enterprise, Data, and Application Architects and Developers to help customers innovate and focus on gaining operational efficiency. Major experiences reside in strategizing multidisciplinary business topics and leading cross-functional teams to bring about fundamental change and improvement in strategy, process, and profitability. Frederik has 25 years of experience in the IT industry. He has held and holds Technical, Presales, and Corporate management positions and focuses on leveraging his in-depth knowledge of the IT and Business landscape.